Inspired by the charism of the Franciscan Sisters of Allegany,
the mission of St. Paul Catholic School is to provide students with a foundation for life
through faith, academics, and service and to assist students in developing their gifts and talents,
so that they may fulfill the plan God has for their lives. 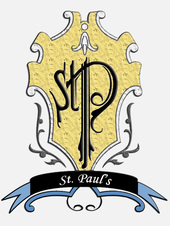 As St. Paul Catholic School celebrates its 90th year, we do so with pride and thankfulness to the Franciscan Sisters of Allegany, New York, who, with their foresight, dedication, and hard work, have been the cornerstone of the school's history, and present day mission and philosophy. Inspired by the Spirit, and mindful of the call to proclaim the Gospel message, as St. Francis of Assisi did, the sisters have committed themselves to justice, peace, and active love, in carrying out their mission, to be and to witness.

St. Paul Parish, St. Petersburg, Florida was established in 1929. The first ambition of the people of this new parish was to build a parochial school. Father James Enright, pastor, invited the Franciscan Sisters of Allegany, New York to open a school. On September 15, 1930, St. Paul Catholic School opened with five Franciscan Sisters and 136 students in grades one through nine. The school consisted of seven regular classrooms, one double room, a small kitchen, and an auditorium doubling as a church.  June 1931 brought the end of the first and very successful school year and the first eighth grade graduation. All the equipment in the school was paid for before the end of the first year. This generosity and involvement of the parishioners and school families, which so propelled the school in its beginnings, is evident today by the most recent school and campus renovations that took place between 2007 and 2015.

The school grew rapidly and each year the teaching staff increased. By September of 1933, the school expanded to 12 grades. The staff consisted of 11 sisters and three priests. An extensive library was added, a drum and bugle corps was organized and school uniforms were adopted. The 1950s brought further expansion. The high school moved into its own building. To meet the needs of the growing student population a two-story combination meeting hall and cafeteria was erected. This second building included complete kitchen facilities, and boys’ and girls’ locker rooms. In 1969, when the diocesan high school opened, St. Paul High School closed.  An athletic field was constructed and a second floor was added to the elementary building.

As the school population grew, so too did there become a need for an After School Care Program to accommodate working families. In 1986 the school opened an Extended Day Program. This service is offered from 2:50 to 5:30 p.m. every school day.   In 1993, an Early Childhood Program was opened for four year olds. This program is licensed by the Pinellas County License Board for Children Centers and accommodates 21 four year olds.  In 2000, a similar program was opened for 25 three year olds. Today both programs continue to have waiting lists for entrance into the programs.

​The curriculum at St. Paul Catholic School has expanded over the years. Students in the Early Childhood thru grade 8 are instructed in Religion and all major subjects, as well as Spanish, Art, Music, Technology, and Physical Education.  Middle School students are offered Choice Classes twice a week in such subjects as yearbook, school newspaper, art, music, tennis, health, drama, robotics, and Spanish culture.  In addition to music, art, and drama programs, St. Paul Catholic School has an outstanding sports program.  Boys and girls in grades 5-8 participate in competition with other Catholic schools in the Diocese in basketball, volleyball, soccer, track and field.
Throughout its 88 year history, St. Paul Catholic School has been recognized for its excellent faculty as well as curriculum.  At present there are 42 faculty/staff employees and 328 students. The spirit and charism of St. Francis is as evident today as it was in 1930 and the years that followed.  St. Paul Catholic School continues to strive not only to prepare the mind, but also the heart and soul of their students.
St. Paul Catholic School was one of the first Catholic schools in the diocese to be accredited by the Florida Catholic Conference and is re-accredited every seven years.
10/15/2018